Yonaguni is an island in the middle of the ocean, 111 km from Taiwan and 117 km from Ishigaki Island. Yonaguni being so remote, it has been difficult for its residents to interact with the surrounding islands.

In the past, a deceased person was buried in the tomb without cremation. According to the island customs, two large 1.8-liter bottles of Hanasake were placed inside the grave. The bones of the dead were taken out for a bone-washing ceremony seven years later. One of the bottles from the tomb was used to wash the bones before they were burned and placed in the grave again. Hanasake was sprinkled over the ashes and remaining bone fragments to purify them.

The mourners drank the second bottle that had been in the tomb for seven years while they reminisced about the deceased. Families, who did not drink, kept the second bottle for medicine. Hanasake was carefully protected as an indispensable liquor for life. The custom was to call for the spirits of the deceased to help healing while massaging and applying Hanasake to the ailments of the body.

In the old days, when measuring the potency of Awamori was determined by pouring it into the glass from a certain height and the alcohol content was determined by the amount of foam that formed in the glass. When the alcohol content is high. the largest amount of foam appears. The strongest spirit came to be called Hanasake because the foam resembles flowers in full bloom.

The name Awamori itself was born from the method of measuring the alcohol content by the amount of foam (awa) forming.

Compared to other kinds of Awamori, our Hanasake does not lose its flavor even if it’s diluted much. It’s a very strong and smooth liquor.

Liquor may become cloudy when cooled or diluted with water. This is a coagulated umami component of Hanasake (Awamori) bound to alcohol. Please enjoy. 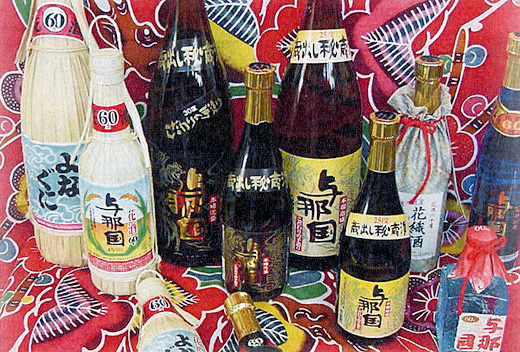 Sakimoto Sake Distillery produces “Ryukyu Awamori Yonaguni” and “Ryukyu Awamori Hanashu Yonaguni.” We do everything by hand, from manufacturing to bottling and labeling. We are particular about making traditional Ryukyu Awamori, and all our employees are working hard to improve our quality further.